The first eJunttan PMx2e was launched and commissioned in Sweden in October 2021, being the world’s first fully battery-powered pile driving rig, and now after six months, the Junttan customer, Aarsleff Ground Engineering AB, is very pleased.

The intent of the PMx2e was to mimic the robust design and performance of Junttan’s diesel-powered PMx22 pile driver, while also delivering a cleaner and greener piling solution. Powered by two detachable 396 kWh battery packs to allow for 12 hours of continuous pile driving, the rig is quieter, consumes less energy, and produces no C02 emissions. Like any new technology, the early stages of adoption will be scrutinized. The reception has been only positive for the PMx2e in its first six months.

Aarsleff put the rig to its first test driving 176 joined piles down to 40 meters on a life science project in Mölndal, Sweden. It was a success, but more importantly, its estimate of 6.5-7 hours of working time on a single battery was realized with a medium workload. The next project was a preschool and apartment building complex in Karlstad. The PMx2e worked from 7 a.m. to 7 p.m. thanks to CCS-based quick charging during lunch and coffee breaks. With the second battery unit, the contractor has been able to work in recent work sites around the clock only by swapping the battery packs.

Even hard-to-impress operators have only good things to say about the PMx2e. An 11-year operator from Aarsleff Ground Engineering with experience using the diesel-powered PMx22 and PM23 reported that operating the electric rig was nearly identical, albeit quieter, to diesel-powered machines. After driving piles of varying dimensions, the only difference he cited was that the PMx2e achieves full power almost immediately, whereas the diesel requires some time to ramp up.

Output, energy consumption, and usability of the rig have been monitored very thoroughly during the six months period. Average energy consumption is measured to between 40-50 kWh and the customer has been able to operate 6,5 – 7 hours with a single charge and one battery pack, and even up to 12 hours with CCS-based quick charging during the breaks or by swapping the battery packs. In addition, the performance in relation to pile meters and efficiency has been at the same level as with traditional diesel-powered PMx22 – even when the rig has been recharged during the breaks.

Junttan is encouraged by the positive feedback and has doubled down on its commitment to manufacturing electric piling rigs. Not only are the next batch of PMx2e’s already on the assembly line, but the selection will be widened to include the PMx24 and PMx25 pile driving rigs. Junttan is also investing heavily in an entirely new generation of electric rigs. There will be many more positive surprises coming in the future, but one thing is clear: “Respecting Ground” will include an ongoing commitment to sustainable piling.

READ THE LATEST NEWS ON PMx2e: 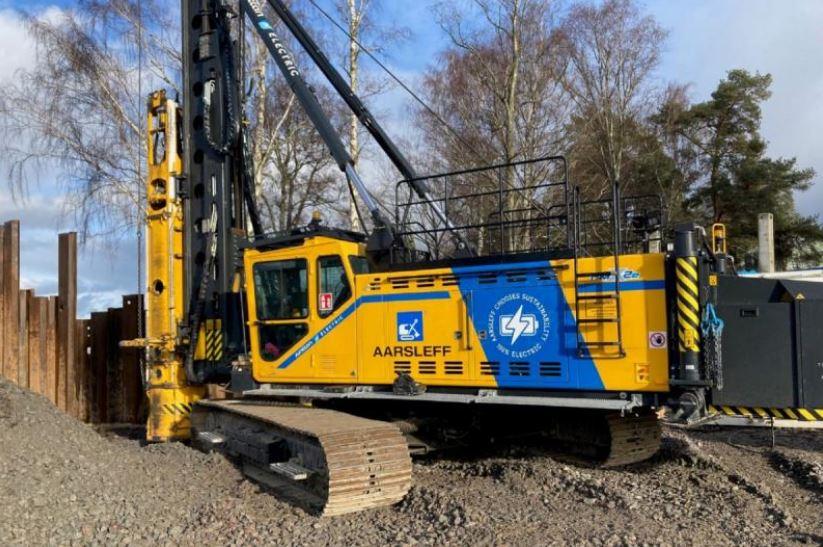 JM – one of the Nordic countries’ leading developers of housing and residential areas – has tested the electric piling rig as well at their project in Sweden (article in Swedish): https://www.jm.se/om-oss/nyhetsrum/2022/jm-har-testat-varldsunik-eldriven-palkran-for-att-minska-utslapp/ (Photo: JM)

For more information on the electric Junttan PMx2, and next eJunttans, please contact: